In this article I would like to elaborate upon the more physical aspects of the person as seen by traditional medicine systems such as Chinese medicine and Ayurveda and ancient Greek medicine.

The physical body, that is the physical manifestation of the spirit, can be looked at as being composed of elements. When I talk of elements I am talking about the elements of nature such as earth, water, fire and air. In Ayurveda they also go into the element of ether, which is space without air, such as exists outside of our earth’s atmosphere.

People can have imbalances in the various elements of their bodies. For example too much fire element can manifest as a red face, high blood pressure, heat rashes, a bad temper, frustration, red spots on the face, etc etc. Too little fire in the body can manifest as paleness in the face, cold conditions such as mucus, and poor digestion. In Ayurveda, your digestion is considered a fire, called agni. When the agni is healthy you can digest food well. When it is weak it is hard to digest food properly as so toxins, called ama in Ayurveda build up from the improperly digested food. In Ayurveda, the small intestine is the seat of the Fire element and in Chinese medicine the small intestine meridian is also of the fire element. In Ayurveda, which actually means the science of living in Sanskrit, the world oldest language, the combination of the fire element and water or oil in the body is called Pitta.

The water element rules emotions such as tranquility and melancholy. When in balance the water element can produce a calmness, and loving energy such as a mother gives to her children. When there is too much water in the body we will usually see imbalances in the lower body as water tends to sink so we will see oedema, or swelling of the ankles or bloating. We may also see a person being too overweight, or lacking in drive and living in the past. Not enough water in the body can lead to dryness both physically and emotionally. Someone with a dry or cutting intellect and not much love or care for others could be seen as lacking the water element. Again dryness in the body would cause joint problems and dry skin and a lack of fluids in the body such as low amounts of semen, or lack of menstruation etc…

The earth element is what makes body mass such as muscles. Strong muscles, as well as making us be able to do things in the world also give us stability such as the earth provides. A person with a lot of muscle mass is not easily blow over by the wind. They can be “solid as a rock”. When out of balance the earth element could lead to stagnation as earth has a tendency to not move. In the physical body it could manifest as such things as constipation etc

When it comes to massage and the elements again our goal is to bring the body into balance. We need to reduce excess and support deficiencies. Sometimes it is easier to support deficiencies through other means such as healthy diet or herbal medicine but massage can certainly play a part. Also sometimes an element may appear to be deficient because another element is too strong. So in this way too much fire will burn up water or too much water will suppress fire. If we get rid of the excess the apparent deficiency may correct itself.

So, if a person is manifesting symptoms of too much fire in the body then we want to reduce this. The cause of this is often in the small intestine, as this is the seat of Pitta. Often too much fire comes from the repression of emotions such as anger and frustration. So we may do a lot of work on the small intestine and find that a person releases some anger. This should be done by the person naturally feeling the urge to scream or even to hit something such as a pillow. In Chinese Medicine this trapped anger or frustration, is also ruled by the Liver meridian system and the sound of Liver energy releasing is like the sound of wood breaking. This is also why traditionally chopping wood can be a good way to release anger, but vocalising by screaming also helps a lot. The sound vibration coming out of the body in a scream is actually energy that is stored in the body coming out. So it is good to encourage people with too much trapped fire energy to scream it out if they feel the urge to when you massage them. By letting this energy out they will feel more calm and allow for the more peaceful kapha type feelings of earth and water to increase.

Too much air in the body will manifest as too much thinking, rapid eye movements, nervousness, ticklishness, and a feeling of being ungrounded. It can also manifest as a feeling of bloating in the belly. Air and fire symptoms tend to affect the upper body as air and fire rise while water and earth imbalances are seen more in the lower body.

In Ayurveda, the air element or Vata, is situated in the large intestine. I also find, in my 20 years experience of massaging people, that people often have a lot of tightness in the small intestine, even the feeling of a rock in their belly when the Vata is deranged. Often, in order to loosen the intestines in a vata deranged person we need to massage the head first in order to calm their mind. This is especially true in ticklish people who will not be able to tolerate abdominal massage on their feet or legs, the massaging of which will usually proceed an abdominal massage.

Vata releasing from the body may come out as sighs, yawns, burps, or flatulence, as well as the release that comes through deep breathing. These are all ways that vata will release. When the air releases from the body a person will feel calmer and more centred and less agitated by anxiety or a restless mind. They may also feel their abdominal area to be less bloated often making them look thinner or more toned. Many other benefits can be achieved through the release of vata such as better joints etc…

Kapha releasing from the body can be achieved through deep long strokes and pressure points. The kapha that will come out will come out as mucous, or phlegm. It can also come out through releasing constipation and extra bowel movements. Many times after a massage, or during a massage, people will experience a feeling of nasal congestion or the feeling of wanting to cough up phlegm. This is Kapha releasing. They may also experience a feeling of invigoration and get up and go. This is due to the kapha being released which was previously causing stagnation for the person.

For Ayurvedic dietary recommendation for treating elemental imbalances I recommend Paul Pitchford’s book Healing with wholefoods and Amadea Morningstar’s book The Ayurvedic cookbook, both textbooks in our Naturopathy and Wholefood nutrition courses.

For various examples of releases of elements such as Pitta and Vata releases see some of our massage videos on youtube.

Download Free Info Pack Find out more about Raynor Massage and our courses with our FREE information pack. 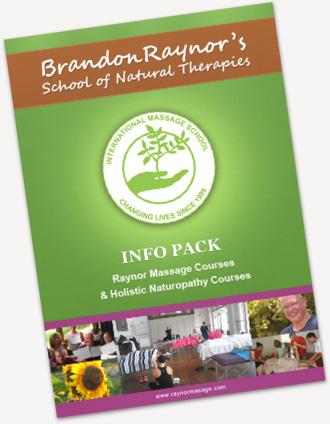